MURICA and France: a complicated relationship.


Do you remember the French and Indian War, as taught in American schools? Sometime just before the Revolution. The French were the bad guys, as were half of the Indians. Daniel Day Lewis with his shirt off. Atrocities. George Washington causes more problems than he solves. Um.... Let's see...

It was just one small theater of the Seven Years' War. I'm going to let Wikipedia try to explain it, but it was essentially a world war as it also involved colonies in Africa and India, along with most of Europe.

Our history books like to blame it for the American Revolution: the British government tried to get the colonies to pay taxes to pay the debt for the war. The colonists said no. The colonists also disliked the British sticking soldiers in their homes and even kicking them out because the soldiers needed to stay somewhere. 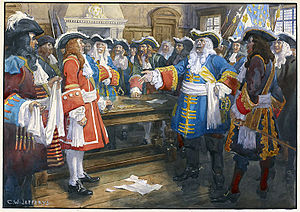 But then we need to step back even further: The F&I War is known by the Canadians as "The Fourth Continental War" because Britain and France had been using Canada as a part of every major war they were fighting in Europe. For about a hundred years. Since 1688 (and before). And they fought a lot of wars in Europe, which means they fought a lot of wars in North America, too.

(By the way, there will be a book in my French series in which a character is in the French Army and is being transferred to Canada. His family is freaking out. I'm thinking of giving him a romance of his own, where he gets the girl in spite of missing various limbs and suffering from PTSD.)

The French Canadians also call the French and Indian war the "War of Conquest" since France finally lost their territories to the British in 1755. The Acadians were booted out of parts of Canada and Maine and shipped off to wallow in the swamps. Their language evolved, as languages do, and now we call them Cajuns.

So anyway, fast forward a mere 20 years, and the British colonists are getting restless about taxation without representation and tyranny and soldier billeting and they decide to revolt. Well, a few of them do. Seriously, no matter how we've whitewashed the story and everyone was pro-USA and only nasty traitors supported the Brits, it was more 50/50. Or probably 20/20/60, the last 60 being the people who were just trying to stay out of the way. It cut across classes. The North tended to be more pro-independence and the South more pro-Brit. You want a Civil War? Here's a Civil War.

BACK TO THE FRENCH.

If France hadn't entered into an alliance with the rebels, we would, as a friend said today, still be speaking English.

This wasn't Revolutionary France. This wasn't Napoleon (though we sure were happy to take the Louisiana territories off his hands later). This wasn't Rights of Man, Voltaire, Montesquieu, Rousseau. This was the Ancien Régime. They were in it to mess with the British and weaken them.

They gave less than one, uh, crap about Freedom and Democracy. Yes, please, let us spend a lot of money, as eet weel peess off zee Breeteesh.

Joke's on them. Ten years on, debt, a drought, heavy taxes, stomping on the peasants, and boom. French Revolution. Who weakened whom, eh?

Now, I read a lot of romance novels. I love me some Regency romance novels. But we seem to forget that the Americans helped Napoleon. The War of 1812 (Imma let Wikipedia do that one, too) was part of the Napoleonic Wars. The US attacked because the Brits were harassing our shipping and conscripting our sailors...as we delivered stuff to Napoleon.The British weren't just attacking American ships willy nilly.

Anyway, it's interesting that nowadays, we remember the fight against tyranny, but the British are our best buddies, while people mock the French. Truth is, it took the US a long time to get on its feet. And France is the one who got us started, even if they did it for their own reasons.

Posted by Philippa Lodge at 8:20 PM