The Interpretation of Magic went live in April!

And in new news:
I've recently hit the button to open up pre-orders for the first book in my next series, The Lion's Heart.

Hometown Pride is the story of grumpy Angelica and grumpier Tremaine, two lion shifters who've know each other since forever, but who are only now, about 40 years later, noticing each other for the first time. 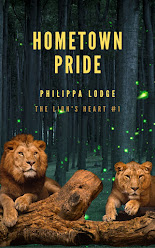 Half-human, half-lion librarian Angelica has lost almost everything. Her mom to cancer, her beloved boss to retirement, and what she thinks is her last chance to be a mother when her boyfriend dumps her for a younger, prettier, lioness. She’s ready to leave her hometown lion pride which her selfish, power-hungry alpha has turned toxic.

Tremaine Jones, the pride’s handyman and pro-bono accountant, witnesses Angelica rage-quitting her job and realizes her scowling face is the main reason he’s been coming to the library several times a week. Her dissatisfaction is a microcosm of the trouble tearing their pride, and the small hometown that centers it, apart.

Tremaine is working on a plan for rebuilding which will now have to include his hopes of being the father of Angelica’s cubs – and maybe even her mate.

Coming July 12 to a Kindle or paperback near you.
Pre-order now!

Posted by Philippa Lodge at 5:55 PM No comments:

I've never been a consistent blogger, but the last few years, with the day job and blogging not being as cool as it used to be, well, it's about never?

You're more likely to get an email from if you join my newsletter!

I've got Book 3 in Shifter's Heart coming out on Tuesday Sept 7, so that's a thing! See above for cover.

Beth Ogden has lists and notebooks and transcriptions and scans and years of work toward her PhD in History. She’s preparing to go to a shifter commune to do more research when she’s asked to take an undercover FBI agent along as her assistant. An attractive, intriguing FBI agent.

There are warning signs that the peaceful, spiritual commune is turning into something more sinister.

Agent Alex Three Feathers, half wolf shifter, half bobcat shifter, all jaded, slips into his role as research assistant, but wishes his undercover days were over. He’s being considered for a role in the FBI’s Shifter Task Force, but there are a few problems:
1) His half-brother is his liaison for this assignment and is already on the task force,
2) They hate each other,
3) He has to survive this commune that’s a hair trigger away from exploding in his face,
4) He’s falling for Beth, who’s likely to get herself killed through her naïveté.

I also just put the pre-orders up for the ebook version of Christmas Spirit, a re-release of my first book, a Christmas ghost novella. Slightly updated and edited from 2013 (has it really been that long???)

A math professor meets her great-grandmother's ghost
Dr. Annabelle Smith is new to her tenure-track position in the math department at the small college where her great-great-grandfather taught more than a century before. She's years away from being tenured faculty and has to be the perfect professor in all ways, considering the tight, unforgiving university job market.

She definitely doesn't believe in ghosts, but ever since she bought her ancestors' farmhouse, intense dreams have plagued her.

When her attractive history professor neighbor, Chris, returns from sabbatical, the ghost invites all her memories and throws a Christmas party in the living room.

The ghost wants to know what happened to her son.
Chris wants Annabelle.
Annabelle wants to keep her job AND Chris.

Posted by Philippa Lodge at 9:28 PM No comments: 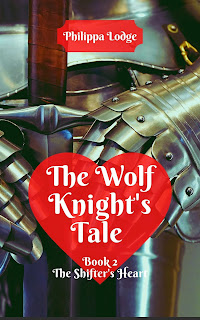 It's out on Tuesday, June 29th but you can pre-order or buy from the same link. I uploaded the final version of the paperback, too, and told it to go live, which should happen in the next couple days.

Kindle ebook ($4.99), Kindle Unlimited (included in the KU subscription price), and paperback ($9.99). Those are US prices - the international prices are based on those, but I don't know them off the top of my head.

So: I love my wolf shifter swordfighter and my magic healer vet and you will too. ENJOY!

P.S. Still getting a panicky feeling about promo and the promo sites people recommend are booked up far out into the future and/or cost a whole lot more than I'm making. SO... maybe on the third book? I have some rewrites, new scenes, and edits to do on it, plus it doesn't have a title or a blurb yet, but I'm aiming for August, which.... EEK.

Posted by Philippa Lodge at 3:44 PM No comments: