So yes, pre-order and buy and read and love and review!

The part of this indie publishing that's getting to me, though, is that I was going to treat this book as a sort of soft launch, like restaurants do (probably other industries, but I have seen it with restaurants), to see what works a bit, see what doesn't, get my feet under me, build some word of mouth, not spend much on it, relearn how to do advertising on websites, etc etc. Then I'm going to come out bigger with the second book, because I'll know how to do stuff!

Yeah, do I even know me? Have we met?

I mean, in my spare time from too much day job, of course, but also because I don't know what I'm doing with marketing, etc. and instead of trying stuff, I'm spending that time stressing and doing what I already know how to do (posting on social media, mostly). And also stressing.

I recently listened to a book that I loved in so many ways, but the main character had a history of depression and should have been diagnosed with anxiety, too, because every time someone had a secret, she started to spiral. "He talked to his ex and is nervous about it, therefore she's pregnant and he's going to dump me!" and this book was FULL of secrets and she ALWAYS got anxious and there were too many misunderstandings. The misunderstandings were organic to the characters, though, not really the "Big Mis" that bugs me a lot in some books, the kind that can be solved with a conversation. In this case, they  had to each unpick the secrets and misunderstandings of their families and their entire lifetimes. And probably get some therapy.

Right, what was I saying? Anxious. Yes. So here I am writing about it on a blog that has sat moribund for a few years.

And to link this back to my book, my main character, the eponymous Fox, has a few secrets, but she mostly won't look into Tommy's secrets too hard because the secrets might hurt her. She doesn't confront him about bullsh*t very often, just gets distant and cold. I'm pretty sure I will be told she's unlikeable and should have been more open and trusting, but she has her reasons.

Posted by Philippa Lodge at 6:53 PM No comments:

May 13th approaching at warp speed

It's been a crazy couple weeks with the day job, but the next couple look calmer (we have this end-of-month cycle and some months are more brutal than others, this month due to a tech thing with one of our programs that added extra work for everyone. Wheee!)

Memoirs of a Fox is coming out May 13th! Paperbacks can be purchased right now and will probably get to you by about then (my mom got her copy right after it became available, to the point that her copies don't have page numbers. Thanks Mom!)

The Kindle version can be pre-ordered for $4.99 and will pop up at midnight on May13th.

ALSO: May 13th I'm assuming the Kindle Unlimited ebook will also be available. If you want to try it out without buying and have KU, go right ahead.

All these options can be accessed HERE.

Go forth and order!

Posted by Philippa Lodge at 6:31 PM No comments:

It's my birthday and I'll read if I want to

So it's my birthday today and I received a few of THESE this week: 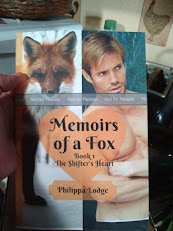 Yes, that's a stylized chicken on the kitchen wall in the background. We rent. Or it's a werechicken. WHATEVER.

And if anyone is interested in a paperback ARC or a mobi file to read and review, let me know!

Posted by Philippa Lodge at 4:00 PM No comments: