How many times have I looked up how many miles are in a League?

I can't even tell you. The answer is... uh.... Well, it's different for a French "lieue" than an English "league." And it changed based on where you were in France. Wikipedia cites Ken Adler's The Measure of All Things in the article on "Units of Measurement in France before the French Revolution" when it says: "It has been estimated that on the eve of the Revolution a quarter of a million different units of measure were in use in France."

But the answer is "as far as a person can walk in an hour," which was standardized as somewhere from 3 to 4 miles. A Google search pops up 3.45233834 miles. Yahoo search sends me down a rabbit hole. And let's not even talk about nautical leagues.

And then I have to know how fast a horse can trot - with someone on horseback or in a carriage and if they're traveling a long distance on one horse or if they're changing. So how long does it take Jean-Louis and Helene (Book 2) to cross from Dijon to Poitou? How long from Poitou to the imaginary ancestral estate west of Paris? And from there to Paris? Or Versailles (which is closer)? And Emmanuel and Catherine (Book 3) to go from Versailles to a couple of hours away... how far do they go?

So let's say that space and time in my books are far from precise. 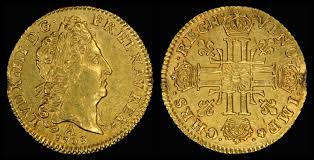 (Demi-Louis-d'Or from reign of Louis XIII)

Someone steals Catherine's stash of money from her room. It's a purse. It holds... Louis d'Or? Francs? Ecus? Jetons? Sous? Livres? Pistoles? Let's just say it was a modest amount of money for the aristocracy, but it was all her cash and would have supported her for a long time if she lived more simply than she was used to. And did they keep their money in banks? (yes) And paper money? (no). History World has a quick run-down of European banking.

Hey, I'm doing the best I can. Wikipedia and Google make it so I can write historical romance at all. Don't blame them when I don't/can't figure it out precisely.
Posted by Philippa Lodge at 1:30 PM