Because polite society spends a lot of time talking about the weather, Though these days, you can't discuss WHY the weather is weird, because it wouldn't be polite.

I did a minimal amount of research into the weather in 1690 in France (seriously, just needed the trend). Turns out it was part of a cooling trend that led to poor crops and hunger. I tossed a minor drought in so a drainage pond would be low and workers could discover a skeleton.

Because that's what happened recently in Folsom Lake.

Folsom Lake is near here and looks like this these days:

I live in Northern California, which means drought. 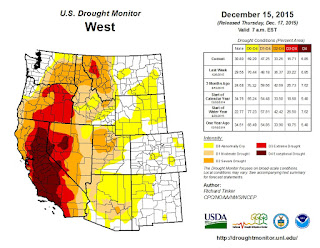 The dark red "D4 Exceptional Drought" covers where I live and up into the mountains where most of my water comes from. We've had some rain this winter (because it only rains in the winter here.) (OK, there is sometimes a little rain in other seasons, but it's negligible), but as you can see, we're far from refilling our reservoirs and aquifers.

I just wonder how long until they say we can't even water our trees. And how much longer we'll be not flushing toilets except when absolutely necessary. And how much longer corporations will get away with building bottled water plants here and insisting farmers get all "THEIR" water because that piece of land had a dude who put up a sign by the creek once in 1850 saying they get the water. Water rights are crazy weird out here. And there are too many people.

Now this is our predicted weather pattern this year: 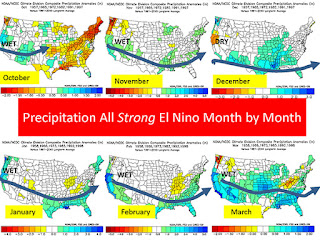 I'm sorry that it will be dryer than usual in the Midwest where they grow lots of corn and stuff (I sound flippant, but that's where I'm from, that yellow blob there for Jan-Mar. And drought there is also a huge deal. I don't wish that on them AT ALL. Been there, done that.)

And yes, I do think about moving back there (for water and to be close to my parents), but now that I've lived in this area for 13 years (!?!) I have roots here, too. It's the longest I have lived anywhere since leaving my parents' home when I was 18 (and I kept going back there on breaks and between moves and so on. And still go back, but not often enough.). We've lived in this house longer than I lived in any house in my life, except maybe the house we lived in from before I was born until I was 11. It's about tied. Next spring, we'll have been here 12 years. No wonder I think of it almost as MINE.

But if it could just rain slowly and steadily here for the next three or four months that would be great.