Here's part of Chapter 1 of The Indispensable Wife. It's a bit wild, but everything goes to h*ll in the first chapter.

In spite of the drama, I always imagine the crossbow bolt in Pâques' arm as the arrow in Monty Python's Holy Grail, the one that hits Lancelot's servant, who announces "Message for you, sir" right before he collapses.

"Pâques" is the French word for Easter and/or the whole Passover/Easter season. I don't think I had a deeper meaning for it when I chose it after looking at a list of Seventeenth Century French surnames. But my literary analysis brain, seeking symbolism, is darting all around ideas of sacrifice, sin, forgiveness, etc. Pâques has a really small role, though.

Dominique's other servant in this scene, Le Fèvre, used to have a larger role before some of the edits. He's a guardsman who acts as a field medic/surgeon from time to time. They sometimes refer to him in those cut scenes as "La Fièvre" which means "fever." Etymology geek alert: The word February comes from purify. The online etymology dictionaries don't link fever and February, but it seems like they should to me, the amateur geek.

Pâques, who traveled with Dom everywhere as the captain of his personal guard, approached, weaving through the crowd. Dom noted that he still had some time to wait before his turn to shoot his arrows in the tournament, so he allowed the man to pull him to the side.

“What sort of rumor?”

Dominique stared in surprise. “If that is so, we will take this straight to the king and his guard. Who is said to be a treasonous assassin?”

Pâques frowned. “You are, Monsieur.”

Dominique staggered a step back in shock. His brain churned through all the people to whom he had ever mentioned his unease with the constant warfare and the elaborate palaces. With the high taxes and pressure on the nobles to stay under the king’s nose at all times. Was his disapproval seen as treason? He wasn’t the only one to criticize the king. He had done his best to be a rational voice within the court since childhood. He would never work against His Highness, no matter how much he tried to guide the king. Surely Louis knew that.

Dom shook his head. “Ridiculous. I will tell the baron that I withdraw from his tournament due to urgent business.”

He had just turned when he felt a hard hit to his left bicep and heard a loud crack. The force spun him around and threw him against Pâques, who fell back, a bolt from a crossbow stuck in his upper arm. Dom struggled to sit as a lady a few feet away swooned and her companion carried her away. Dom dragged himself to his feet, grasping his left shoulder with his right hand and turning in the direction the bolt had come from. He looked down to reach for his court sword and saw the blood running out from under the elbow-length sleeve of his red silk coat, staining the puffed sleeves of his shirt and his lacy cuff, marring his pale gloves. He stared at his hand in a trance as the world around him dimmed. He watched another of his guardsmen, Le Fèvre, who sprinted across the lawn, scattering nobles, most of whom were only starting to notice that something was amiss. Le Fèvre tackled him to the ground. Another bolt flew past their heads and into the small patch of woods behind them.

“Stay down, Monsieur,” Le Fèvre panted. “Stay down. You know better. You taught us all better. A sword against a crossbow? Impossible. Don’t be an idiot.”

“See to Pâques, he has the bolt still in him. I’ve only been nicked,” said Dom.

His head felt rather light for what should have been a minor wound. Le Fèvre took out a knife and cut away his coat and shirt sleeves, and then wrapped the sleeve of the shirt around Dom’s wound.

Pâques moaned beside them. Le Fèvre went to Pâques and started to cut his sleeve off, too. “There’s…the bone is... Merde! Where are the palace guards?” Le Fèvre looked around wildly. “Guards! Bandages!” he roared at some big men who strode across the lawn, which was clearing as the rich and titled fled. “Two litters!”

Dom raised his head to see servants racing from the nearby kitchens and discovered that his head was really too heavy to lift. 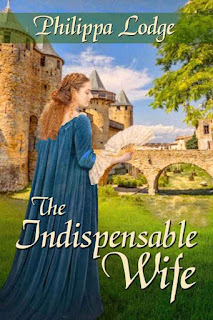 Pre-order links in the right sidebar!
Out October 7th!
Posted by Philippa Lodge at 12:36 PM