I'm fighting off a migraine. Yesterday, I went to my RWA chapter meeting all doped up on ibuprofen, rocking a touch of aphasia. (Aphasia is when you can't think of words. I have enough trouble with speaking when I don't have a headache. I posted on Facebook: "Bleeding like a stuck pig." Obviously, I was also having trouble with mixed metaphors.) I came home and lay down for several hours with an ice pack on my head and neck.

I ended up reading all of Weir's The Martian in one afternoon and evening. SO GOOD. Absolutely nothing to do with the 17th century or my own writing (except that I would have put in a whole lot more about the astronaut's human relations and despair. I mean, he's on Mars by himself, thinking he's abandoned. There should be a lot more despair and introspection and thinking about friends and loves and so on.).

I also started reading a book about Louis XIV's Versailles, which is more to do with Book 3, on which I've just finished an editing pass and which could use some more detail about how people lived there. 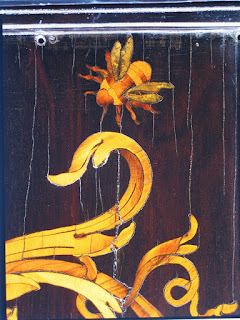 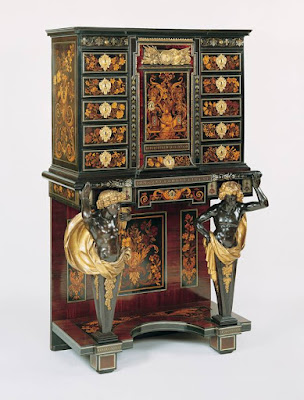 The Wallace Collection is a smallish museum in London.

Have I mentioned I used to live in London? We were in the extremely unfashionable end of the West End. That's the fair/middling/sometimes bad part of town even further west than Notting Hill, Holland Park, and Kensington Palace. Anyway, I was busy living on a modest budget and having babies, so didn't get to see as many cultural things as I would have liked or travel as much as I wanted. Also, I wasn't quite as into the 17th century as I am right now. But someday, I will get back to London and go see this museum.

They have been doing a series of videos and blogs and such in memorial of the 300th anniversary of Louis XIV's death. Follow them on Facebook.

The above cabinet and detail were by André-Charles Boulle, who made some fancy marquetry for the king, his relatives, his court, and lots of other fancy people. Well, he and his workers. He was an artist in that style. Can you imagine having bronze inlay all over and carved cherubs holding up your dresser?

And right now, I'm dallying with the decorative/functional arts in the time of Louis XIV. Jean-Louis de Cantière, one of Aurore's older brothers (the army officer one) in The Indispensable Wife, (out on October 7th. Links to where to buy at top right of this page. Sorry, I have to keep mentioning that.) is married to the only child of a furniture factory owner. He married a fortune, but married down, as they say. When he gets his own love story in 1668 (The Honorable Officer), his wife has passed away and it looks like someone is trying to kidnap or kill his daughter. The wife's wallflower cousin is the primary parent to the little girl and she runs off to seek aid and protection from Jean-Louis....in a war zone.

And not too many spoilers later, let's just say that someone's got to turn the factory around and make it profitable in a time when this sort of amazing marquetry and baroque swirls and elegance are the style among the really rich.

In book 3 of the Châteaux and Shadows series, Emmanuel visits the factory ten years later.

I've started a novella about another of the brothers, the one who's handling all the finances while someone else handles the artistry and elegance. It will be book 3.5 (per the current style of labeling the short stories between the stories) and it needs... Well, I need to figure out what the plot is. A major event is Henri's debilitating back pain, but in the tiny bit I've done, it's already dipping into the looming Huguenot Protestant crisis, issues of religion, issues of homosexuality.... It might have to be a whole novel.

But before I get very far with it, I'm going to have to increase my understanding of Louis XIV style furnishings. And what would the up and coming furniture dealer be making? Not the ones who sold chairs to the king, but the ones who sold to the baron's widowed aunt for her country house.

And right now, I'm off to edit Book 2, The Honorable Officer. That should be out within the next few months, too.
Posted by Philippa Lodge at 11:17 AM