On reading, writing, and editing with background noise

As I sit here, trying to edit and/or trying to come up with some sort of stuff I can use as promo, my darling fifteen-year-old son is listening to a podcast and playing Minecraft. I am quite sensitive to outside noise and it's driving me CRAZY.


Oh, now he's on a YouTube video. They're opening a couple of 17th century chests, which is slightly relevant to my writing. They've been opened many times in the last 300 years, but the chests themselves are a treasure. The first one's keyhole is hidden and there's a separate lock box in the false bottom that they don't have the key to. It's heavy wood with lots of metal, but they didn't mention if anyone tried to x-ray the box.

The second one also has the hidden keyhole. It has coins in it! The coins are from the early 70s. BUMMER. 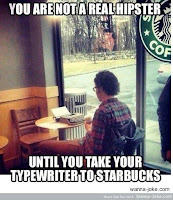 It's funny, though; I generally can go to a public spot, like a coffee shop, and not get distracted too much in spite of the constant noise. Sometimes the music yanks me out of my head, but even then, I can get back in the groove.

It might also be because there's such a wall of noise that it becomes white noise. When I get bored or the new! awesome! hard! wooden! chairs in Starbucks start making my bum hurt, I am more easily distracted.

Just the other day, I was in a Starbucks for about 2 1/2 hours and by the end I was about ready to get up and go over and ask the one woman in a group of three to just talk more softly please. Her friends were quiet, but her voice echoed inside my ears. And then two older gentlemen came in and one was SO LOUD.

But as I said, by then my behind ached and I'd been working for a long time, so everything distracted me. And then it was almost time to go. So I went.

Also at home, I know there are chores to be done. Today, I keep looking out my front window and seeing my ancient Corolla and remembering that the battery of my other car died (I think a certain young daughter left the dome light on overnight Fri-Sat), and we still have to roll it out of the garage and use the Corolla's shiny new battery to jump the other one. Since I'll then have to run the engine for a while to recharge the battery, I will do it when I'm about to go somewhere anyway. Like to Starbucks. To write. While my husband leads my kids and a couple of their friends on a Dungeons and Dragons adventure.

We're all about those geeks, y'all.

Tips on shutting out the world to get your work done appreciated. Commiseration on loud family members also appreciated. And discussion of all things geeky.