Henri et Marcel - get it on your calendars

My next book, Henri et Marcel, number four in Châteaux and Shadows, a novella, but which squeaked past the 40K words necessary to release it in paperback with Wild Rose (and let the people say WOOT),

Henri de Cantière has been surly since he returned from visiting his family at Versailles, but he doesn’t want to burden Marcel Fourbier, his longtime lover, with his problems. He can’t sleep and hurts all over at exactly the time when everything else seems to be falling apart.

Marcel can barely keep up with his usual duties of running their household and creating beautiful furniture in the de Cantière factory when more burdens fall on his shoulders. His estranged Huguenot family condemns him to hell but wants his help, a stranger attacks him in a dark street, an arsonist tries to destroy the factory, and Henri’s beloved sister-in-law, who has been like a sister to Marcel, is weakening after being in labor for several days.

Most of all, Marcel wants to find a cure for Henri, the man who holds his heart. 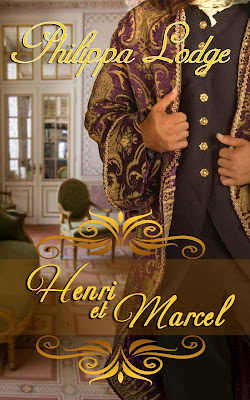 I have the ISBNs but no links yet!

And it's all very exciting! Though it's over two months away. Aww....