As my friend/roommate/fellow author, Kristina Mathews said in her blog yesterday, "Is It Possible To Have Jet Lag When I Didn’t Even Change Time Zones?" (By the way, she has a new contemporary romance out today, Swept Away is the first in her new whitewater rafting series!)

I got home Sunday afternoon, unpacked (dirty laundry, books, toiletries), and lay down. I got up when my husband made dinner, then went back to bed. Monday was much the same, only I napped. Then I took a very long walk with a friend who has a new dog that has to be worn out every day. And slept like a log after that.

And what can I say about the RWA Conference? A. Maze. Zing!

I was extremely nervous beforehand, even more than the last time I went two years ago.  I kept forgetting to breathe as I booked the conference and hotel and flights. I kept feeling the tightness in my chest that means I'm going to flip out.

Wednesday night: Massive book sale/signing with proceeds going to literacy programs. My first stop: Nalini Singh. I didn't buy Allegiance of Honor until I could get a signed copy. SQUEE! (and note the t-shirt. Hiram College represent! No, I didn't get any comments on it. OH WELL.) 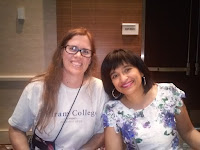 And working her table as a volunteer was the lovely woman who goes by e_bookpushers on Twitter and blogs with the Bookpushers. Because it's not just about meeting the big name authors, it's about connections. Which makes me sound like I'm just trying to flatter her, maybe? I like what she has to say on Twitter and in her review blog.
And I took a few more pictures and selfies and had others take pictures of me with people. Then I took a few pics at the Kensington and Indie Publishing signings, then of me and Grace Burrowes in the hall (she signed my notebook because she wasn't doing any signings!)....then nothing until the last night. 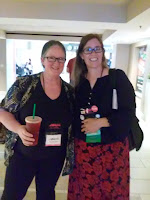 Beverly Jenkins spoke during lunch on the first full day. She gave us a history of African American romance from slave narratives to when she started writing in the nineties. And spoke about how some authors literally turned their backs on her. And oh my goodness, I'm tearing up thinking about it. Amazing woman with an amazing career, advocating for diversity, studying history, writing novels. (Oh, and she was another of my first stops at the signing. I got my mom Book 7 of her Blessings series which just came out? I'm such a good daughter!)

Friday morning's big talk was by Dr. Valerie Young, who spoke about Impostor Syndrome. And so that was a bit of a catchphrase for the rest of the conference. Because seriously, it hits women more (or we admit it more?) and in something creative, everything's subjective.

Saturday's was Sherry Thomas, who writes amazing novels in English, though her first language is Chinese. She spoke about how she was on her way to Yale (Harvard?) for grad school when she got pregnant, got married, and decided to not get that degree. Then post-partum depression hit. So lots of tears of recognition from me, including when she talked about starting to write as being her therapy and her way out of depression.

I attended a whole bunch of classes, which is where the Fear of Missing Out kicks in.

There are so many choices and I missed some really great things because I had something else booked or because I chose wrong. Or I chose right, there were just too many really great things. BUT I got some ideas about marketing my books and on author brand. I heard some fun chats on historical romance and on sex scenes. I can't even tell you what I learned, but I took notes so maybe when my brain is ready, I can remember.

I'm sort of down right now because I pitched my New Adult (typically ages 18-25) romance to an agent and an editor, and they're both pretty leery about new adult. Not just leery: as long as it's New Adult, it's a no. So now I'm deciding if this story would swing better into Young Adult or Adult Contemporary. It's the one with ensemble cast (AKA: too many points of view) and is as much about the friendships as the romances. Or do I leave it the way it is and pitch it to small e-first publishers? Or self-publish? Do I really want to be rowing upstream due to my subgenre the way I am by writing about 17th century France?

ANYWAY, I'm trying to finish the second Greatest Hits book (or at least get most of it down) this month for Camp Nanowrimo and into August. Then I'll make the hard decisions. I still have other manuscripts to edit (and to finish) in my French series. And I got a job shelving books at the local library, which I started today. I'm going to be really busy! And this career thing is going to take off for me!


One last note about the RWA conference: In my experience, people are nice at conference. I know it sounds cliche, but many of us put our smiling faces on. We compliment other women on their hair and clothes and books. We're (most of us) trying to look professional. Except for the Rita ceremony and my killer shoes, I was a pro in golden Birkenstocks and no-heel boots. I got compliments on my red-flowered skirt and my red-flowered Rita dress.

In a way, we're competing at trying to look good and stand out. In other  ways, though, we're holding out a hand in friendship. Authors, agents, editors, and others who know what they're talking about (and don't give me your impostor syndrome: you know what you're talking about!) are holding sessions in which they tell us (some of) what they know and take questions. I don't know what happens in private, but in public, the kindness tends to win.

It's an incredible experience. If you're a romance writer, I highly recommend it. If you want to dip your toe in, find your local RWA group or an online chapter. The support is amazing.

OH, and they've reignited the "Romantic Elements" category for the Rita awards, so if you write other books that include romance, but aren't strictly romance novels, you're back in business. I'm not sure if they're doing a Golden Heart (unpublished) for it yet. My brain is missing lots of details.
Posted by Philippa Lodge at 7:28 PM