I needed something to fill my days, apparently. So with attempts at setting up marketing for Chevalier, contest entries queries and edits for Big Chill, getting things done so I can self-publish my ghost story nearer to Christmas, worrying about RWA National Conference (and reading books with titles like "Networking for Introverts"), and, oh, thinking about looking for a part time job, I decided that I needed to keep myself writing. I only signed up to do 25,000 words, since I'll take several days off in the middle. And I started the month with almost 25,000 in the story, so I'm hoping this will be the middle third of the novel.

And otherwise.... I'm not feeling great at the moment. And I need to refill my hummingbird feeder. And buy more sunflower seed for the giant turkeys (I spotted Arrow Turkey the other day, so he's still around. He might have an infection, though, as he has a lump on his neck near the exit side. Ewwwwww.). And I'm letting the puttering around the house soothe me a little.

And Happy Fourth of July! Independence Day for us MURICUNS.

I was going to post a picture of me in my MURICA flag t-shirt, looking disheveled and puffy-eyed, but my phone has stopped uploading automagically to Dropbox, so am off on a tangent trying to figure out what's up with that. Dropbox settings? Lack of space in Dropbox? Phone settings? It's a mystery. And OH GOOD, my phone just crashed as I was downloading Dropbox updates. I've had it for about two years and it was the cheapest smartphone, so it's probably past its prime. ARG.

Anyway. The sequel to Chill is moving along. Not with the same joy as Chill, mostly because it's a hard patch in Mattie's relationship. Everyone has the Summertime Blues (maybe I should have used a cheerier album with this song on it, (isn't it in Stand By Me?) instead of Rolling Stones with their addiction and lack of satisfaction and stuff). 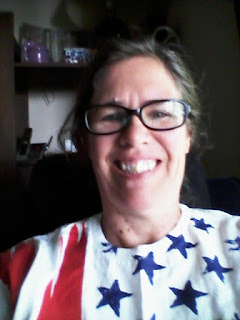 There we go. Not quite a candidate for my official author photo. Which I still need to do.

Every time I walk past my almost-fourteen-year-old, he sings "Muricuuuuh."