I've been editing my novella the last couple of days. And even with just editing, I was stuck. Something is wrong....but what?

Then another author, Cindy Nord, who writes historical romance set in the American Civil War era, posted a picture of Christopher Vogler's Hero's Journey with the plot and character development tracked together and... well, let's just say I knew the plot needed something and the characters needed to grow and change, but I hadn't quite figure out how to organize it, yet. 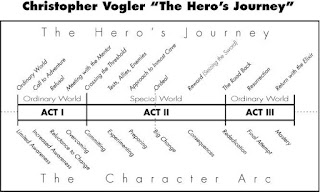 And now, by stepping away from my computer for a bit and outlining my plot more or less based on that (at least on the 3 act structure), I know what to do now. Probably.

One downfall of being a "pantser" as a writer is that when you think of a new element to the story late in the writing, you have to go back and layer it through the whole thing. Mostly, I need to establish at least glimmers of the bits of conflict in the first quarter so we know what our heroes are facing. Or something...

Mostly, I needed to take a step back and look at the bare bones of the story. What happens when? Is it all happening at the right time? Should I move this scene over there? And I really need another scene over THERE.

Overall, it makes today feel productive when it was mostly feeling like rainy day with some guys banging on stuff in the garage installing a heater. So we have heat AND I have a direction.

And now I can move on. WOOT!

And school starts tomorrow. Tomorrow is going to be an exceptionally busy day, but I'll probably have time in the evening to work.
Posted by Philippa Lodge at 6:22 PM