I've been editing like a ... editing person type thing.

I realized that Chapter 3 of Book 3 was almost all "Are we there yet?" so decided it really needed to be trimmed. And then Chapter 5 is more traveling, so it needs to be shorter, too. And I'm not really sure what the point of Chapter 4 is. Once I figure that out, I'll be ready to decide which parts stay and which go, because not much happens except the hero gets along with his family for a change.

Also, I need a better grasp on various locations. Like stables. 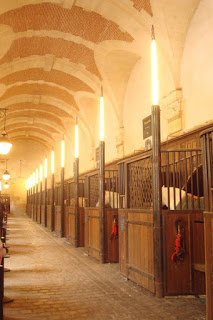 The stables at Versailles are HUGE. I wish I knew exactly when each part was built, but in the meantime, isn't this lovely?

Still no date for when The Indispensable Wife comes out. I'm on tenterhooks!
So here's a sketch of Louis XIV to tide me over.

There's something about a sketch (this one by Charles le Brun, so apparently a study for a painting) that brings home to me, more than a finished oil painting, that this was a person. With the hair just squiggles, only the brim of a hat, and some flat cravat thing, my eye is drawn more than usual to his face: his pouty expression and his enormous nose. 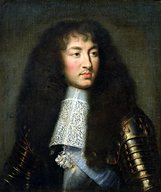 This is a finished portrait (that is in Versailles still... I think) by le Brun. By my unpracticed eye, I'd say he's a bit younger. There's less profile (so the nose is less startling) and the focus is shared by his lacy cravat and shiny armor. This is from about 1662, which is shortly before the Indispensable Wife takes place. He (and the hero of Indispensable, Dominique, who is the same age), is 24. He had been king for almost 20 years and had been declared "of age" at 16.

A close-up with the colors a little off, but you can see his shadow of a mustache.

Can you imagine being put in charge of a country at the age of 5? Well, his mom, Anne of Austria was running things, along with Cardinal Mazarin, the Chief Minister who took over from Cardinal Richelieu, but Louis was the king. According to his father, Louis XIII, his mother was NOT supposed to be the regent, but Mazarin and Anne wrested power from the council that was supposed to rule. Girl power! Priest power, too.

In 1661, Mazarin died and finally, he was king on his own two feet. He announced he was going to be his own Chief Minister and not bring in a Richelieu or Mazarin. The centralization of power in France became even more centralized.

He had advisers and cabinet members, but HE was large and in charge.

Back to Dominique, the husband with an Indispensable Wife. His father died when he was nearing 20, so he had a more normal childhood - for the son of a noble. Yet he spent a lot of time with the king as a boy. There were certain noble boys selected to be the king's peer group. They were supposed to let him win, of course, but Dom sometimes had trouble with this. His father had been a secret supporter of the second Fronde, the part where the nobles fought back, trying to get back some of the rights they had lost to the centralization of power. They lost, but Dom's father always considered the request to have his son at court to be more of a command - and a hostage situation.

Dom still isn't happy with all the time he's supposed to spend at court. He's not happy about the time he spends away from his lands and from the little military school his dad started. He also has definite opinions and tends to express them in a cold, blunt way. He doesn't have many friends outside of his wife's family, so finds himself the victim of rumor and without strong assistance when his château is taken and his wife held hostage. And the rest... you'll have to read the book.
Posted by Philippa Lodge at 8:26 PM