Dates, names, and other series nightmares

Not long ago, I realized that over the course of the three books in the Châteaux and Shadows series leading up to the one I was finishing (Book 3, Emmanuel's book) I had NEVER given the Baronesse de la Brosse (mother of Aurore, the heroine of Book 1, Indispensable Wife) a first name. It seemed significant to me that even I overlooked her; she was mean and spiteful because she was an afterthought to her husband (and became an afterthought to her children, too, because she was horrid and distanced herself from them).

So I gave her a name. A fabulous name. A name straight from a spiteful, vindictive character in Moliere's The Misanthrope: Arsinoé.

Well, not long after, I discovered that I had, in fact, given her a first name.

In the first book.

The one I was reading the galleys of. 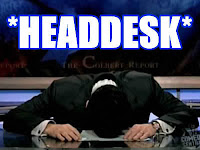 I probably had that name (Gabrielle) in the very first draft. So for YEARS, this lady had a name and I had forgotten it. I started to feel some pity for her. She's still awful, but even I forgot her name.

The thing is, I started an Excel file of the family and their birth dates and names and so on a long time ago, but I managed to misplace it somewhere in the workings of some computer, probably the laptop that croaked a couple of years ago. At least I'd like to think I didn't mindlessly delete it.

Also in revising Emmanuel's book, I discovered that I had forgotten some people when I was writing a rough draft of what will likely be Book 5, featuring one of the Baron's grandkids. I mean, the book had the lovely, sweet Diane (second daughter of Jean-Louis, the Honorable Officer of Book 2) as a secondary character. According to that Book 5, there were only her and her older sister. But according to Book 3, there are 4 kids by 1678 and another due at any moment. Good thing I caught that now instead of a year or two from now when the book comes out.

Some people are devoted to a writing program called Scrivener, which lets you set up a "series bible" and names and dates and descriptions. It sounds too complicated for me with a lot of setup.

But really, someone's going to have to keep track of my characters, since I seem to be falling down on the job.
Posted by Philippa Lodge at 1:08 PM