Random Ramblings for a Saturday Where Nothing is Planned

Lazy Saturday morning. I'll be ambitious later in this beautiful weather (sunny and 65 predicted) and walk up to the library to sort books. It's about two miles each way.

Yesterday, I did so much walking that I set a personal best on my Fitbit (12K steps). But I have it sync with my online food tracker and while it gave me a 400 calorie bonus the day before for about 9K steps, it only gave me about 170 for 12K. And I know it doesn't matter, because I know how far I walked and how sore my legs are today, but it's frustrating that whatever logarithm they're using isn't consistent. I'm tempted to turn the sync off and log it manually as distance. I mean, so I can eat more without feeling I've failed. Then I remind myself that the point is "I gained 20 pounds in the past year," not "How can I game the system?"

Baby Cat is helping me type. 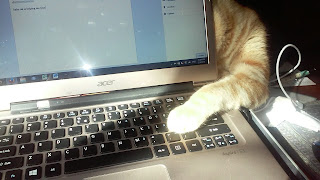 I'd like to say any typos are his fault. But I can edit and he can't.

One of the things I walked to and from yesterday (or from and to) was leaving my car at the nearby tire/alignment/etc place to see if they could figure out what the rubbing noise was. They couldn't, but said our struts and tires are almost worn out. So that's going to be expensive. And we still need to get the old car looked over. The poor thing sits outside since we got the newer car a few years ago and it's deteriorating.

The kids and my husband play Dungeons and Dragons a couple of times a month with a couple of my sons' friends. Today they might or might not be playing. No one has contacted the friends yet. And the middle child is going to a friend's house to build stuff out of bamboo.

I have some yard work to do, too. I wonder if the frost is done for the year here. According to the chart I looked at (based on National Climatic Data Center (part of NOAA) data), the risk is over on average by Feb 18th. It's been a warm winter so far... anyway, do I put my potted plants back outside or not?

I just told middle child to not belt his pants so tightly because a little looser would look cooler.

I also said that, as a family, we are ALL ABOUT being cool.

And that statement, from someone who just said her husband and kids play D&D and her big plans for the day are going to the library and yard work, is the one you should laugh at.
Posted by Philippa Lodge at 11:35 AM