Work and school - the saga continues

I didn't get to work overtime this week and this weekend, because we finally caught up with the queue of tasks I was working from. It was great while it lasted (though a lot of extra work, time and a half is decent pay). The sad thing is that because I don't know the main data entry task, I have to learn that now. And not only do I have to learn it, but I got traded to another team, back in the big room of elbow-to-elbow data processors and had to give up my beautiful, spacious cubicle. The pay's the same, but until I know the data entry really really well, I can't work overtime, nor can I get myself back to the Research team. So I have motivation on two fronts to learn this stuff! It feels like a demotion, though. Sigh.

And now we have Nazis and KKK marching in Virginia and a certain president threatening nuclear war. So the world is even scarier than usual these days.

It's all a bit much for my attempts to write. I'm tired and bummed out when I get home and then I open the news or social media and.... yuck. But I'm starting to see my way through how the plot needs to go on the book I'm working on. It's definitely going to be only a novella  of 30-40K words. But it's going to be awesome :)

In other news, my big kids started back at high school this week and my 4th grader starts next Wednesday. Summer, while still hot, is over. And no, I don't get why they have to start in the first half of August. They get more breaks during the year, then get out in June though. Summer is about two months long.

My oldest son is a senior this year, which means we need to get serious about college search and finances and applications and stuff. He's also taking as many AP classes as he can squeeze in PLUS he's taking Calculus 3 at a community college. He's bummed because he can't get AP history on his schedule due to his other class choices and requirements. But he is taking AP literature and French 4 this semester and AP Biology and Honors Physics next semester. And looking at his schedule on the website, it looks like he IS in AP Government next semester. Is that the one he wanted? (Turns out it's not; he ALSO wanted AP history) I'm mostly worried that he's going to burn out part of the way through the year.

My middle child is a sophomore and I keep wondering where the time has gone. This is the kid I homeschooled through middle school. He struggled in some of his classes last year, but ended up with an excellent GPA overall. Maybe he learned what I've been trying to tell him that showing up all the time and doing every assignment and turning it in makes an enormous difference to your grades. He was jealous of his big brother last year at awards night because he was in the group that had higher than 4.0 due to all those weighted AP and Honors classes. Their actual unweighted GPAs are about the same, so he has hope. If desire to match his older brother (who doesn't struggle with dyslexia) means he works harder in school, I'm not going to protest.

We just finished the school supply shopping for the youngest this morning. Actually, Michael's didn't have red or white tempera paint in the 16 oz bottles, so we got the other 6 colors and not those. I try not to moan about the cost of it, because if we didn't buy the stuff, the teachers would end up buying it, but hey.... why don't we give the schools enough money to pay for that stuff? Surely buying paint and erasers in bulk would be cheaper than sending each family out?

I was going to buy her a few t-shirts when we were in Target looking for a headphone USB adapter, but she was so cranky by then that she refused to say yes or no about the shirts I found. So she's going back with some clothes too small for her. It's not like the stores won't exist next week, so I'm not worried. Or rather, if the stores don't exist next week, we're going to have a lot bigger problems on our hands than her not having shirts with sparkles.

Right. I'm off for a nap. I woke up at my usual 5-something this morning and couldn't get back to sleep. I am not a morning person. Or I wasn't. I guess I am by default now. Meh.

THIS WEEK IN PROMO:

I wrote a little scene of an interview with two of the characters from Mélisande and Bonnie Phelps put it on her blog. 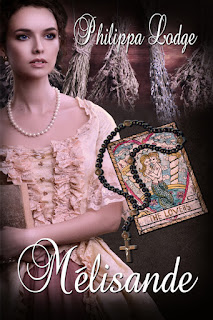 Posted by Philippa Lodge at 3:44 PM