I have started reading through my galley for copy edits, proofreading, and all those last-minute, tiny edits.

I have spent the last couple hours clearing off the top of our TV stand/bookshelf. 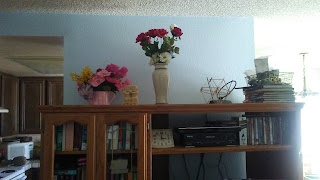 Just, you know, don't look at the rest of the room. Or even slightly lower than this picture. Or even the pile on the right side of that, which is NOT MY STUFF.

And my daughter (who's nine) just came in from the backyard to say she thought she saw a snake and there's a snake skin. So I went out and we retrieved the skin with a stick and it was this: 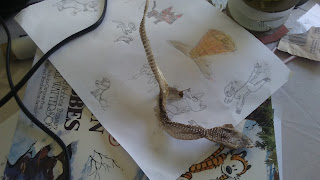 which, you might notice, has legs and is not a snake skin. We have big, nasty alligator lizards in our yard (and yes, they are called that and yes, they look like alligators, though their snouts aren't so long. I found them right away when we were first trying to identify them by googling "lizard looks like alligator"). So we're going to hope that's what she glimpsed and heard and that it's not a rattlesnake. Because those scare me.

In tidying, I found my old camera with its fabulous zoom and flash and need for actual film. My kids are messing with it now. The battery still works and everything. I should go get them some film.

Oh wait, I need to update my book spreadsheet with the book I finished reading this morning...

And now my middle child's bestest buddy just showed up, so I had to show him the picture I found of them when they were six. The flame jacket is my kid and the boy next to him wearing red and blue and swinging a stick is bestest buddy. 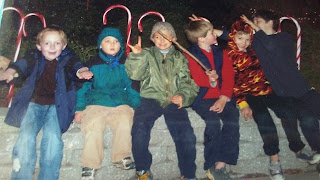 With other buddies, too. And my oldest on the right (who would have been almost nine, given that these were taken near Christmas 2008 and I know that, because there was another picture of us moms and I'm carrying my tiny baby girl in a sling), giving them bunny ears.

Oh, and it's the anniversary of Young Cat's finding day. The day he was trapped under my friend's mom's deck and came to live with us (and for a while we had his two sisters, too). 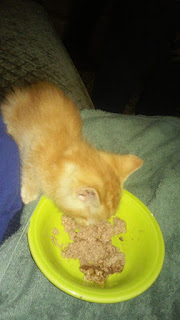 This is him two years ago, when he weighed less than half a pound and half his weight was fleas. He weighs fifteen or so pounds now and beats up on Old Cat.


My oldest is reading to me from the California Driver's Handbook. He's supposed to have already finished his online driving class and have his license. AHEM, BOY.

We're sitting around chatting, because I take almost any moment to chat with teens who aren't always communicative. Even if we're all talking nonsense today. 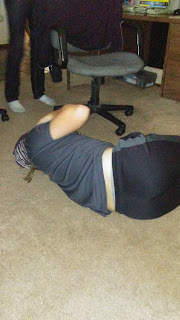 And now they're spinning on office chairs. Because reasons.

I worked for a little bit while they went outside to hit each other with foam swords. Then my daughter tripped on the retaining wall and cut up her feet, so I helped wash and put band-aids on her and generally got sidetracked.

Right. Buddy had to leave because his mom came across a stray dog. Or something? And my kids have settled down to play some online game in Minecraft.

OK. I can work for forty minutes, right?

Procrastination train is leaving the station.

GO READ MY FOUR BOOKS WHILE I WORK ON THIS ONE, OK?
Posted by Philippa Lodge at 5:19 PM