Kids and their play dates

How long am I allowed to call my kids' hangouts with their friends "play dates"? Can I keep doing it as long as I have to drive them around for it to happen? Or, like today, talking to my friend, trying to figure out when our teens can hang out together?

Not this weekend, as it turns out.

When we have those friends over, it's all about the Nerf guns and PVC/pool noodle/duct tape swords and then some quiet time playing Settlers of Catan. If we're lucky, most of the loud times are outside. If it rains or they stay until after dark, it gets pretty loud in my house.

My nine year old daughter (how did she get to be nine?) is at a birthday party today and scheduled to stay (and spend the night!) after everyone else leaves. It's really quiet around here already and it's only early afternoon.

In the meantime, my middle child (who's fourteen) has once again produced the miracle of lunch. It was grilled cheese, but with slices of leftover turkey. Really delicious. He needs to work on his timing and sequencing while making a meal, though, because I ended up buttering half the bread and slicing the the cheese, then setting the table and getting out fruit and vegetables. Of course, if I would butt out entirely, he would have to step up even sooner. On the other hand, there are nights that I get the main course and maybe a carb-y side going and completely forget about fruits and vegetables until the last moment.

Maybe when a kid can cook for me, he no longer should have "play dates."

The main consideration, though was if I would let him have potato chips. I bought a big bag of store-brand chips on sale over a week ago and hadn't gotten around to having them as part of a meal....and these chips were making him insane with food lust. They taunted him each time he opened the Carb Cupboard (it holds all the bread, crackers, rice, cereal, sugar, cake mixes, etc.)

Someone needs to mow my front lawn. The tall parts right now are all foxtails, not even nice grass. My oldest (who's seventeen) did the much bigger, terraced, more complicated back yard last week, so I think middle boy should do the front. Since they're not busy with a play date or actually doing homework, I bet one of them could do it.

It's supposed to rain next week, so it will grow even more. Which is good, except for the mowing part.

Maybe if they can mow my lawn, its not a "play date." 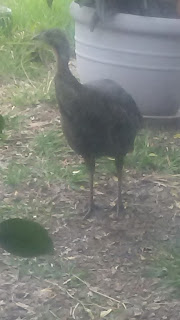 And speaking of kids, this juvenile (she still has a fuzzy head) female turkey is wandering around alone these days. She definitely needs a play date. All the grown-ups are off making babies in the woods and she's lost her flock. Last weekend she (or another just like her) was with a crowd of females when the males were on full display and almost getting run over in the street. When they're acting macho, they don't want to step aside for anyone. At all. Not even an SUV.

Turkeys are pretty smart as far as birds go. Which means they're not exactly smart smart.

The answer for me, is that I don't usually say "play date" out loud except when I am teasing my teens so they will roll my eyes at me, which is one of my favorite things (the lighthearted eyeroll is, anyway. Not so much the one where they are actually mocking me.). My nine year old is still fine with it, though.

Of course, I want you to read all my books, but the one with the most play date-like scenes is The Chevalier, in which Emmanuel, the youngest sibling and only twenty-five and unmarried, is dragged back into the family and exposed to the insanity that is a gathering of his nephews and their friends, all between ten and fifteen. Except the only girl, who's eight and has to keep up with all this crazy boy energy.

In other words, it's a bit like my house, only with swords and cards instead of Nerf guns and Settlers of Catan.
Posted by Philippa Lodge at 2:44 PM