A little more about bread

Thanks to my high school freshman, we might have had a step forward in our bread. He informed me Tuesday night that he had to do a short presentation in French I about some cultural aspect of France. He's known for a while now that he'd have to do this, of course....

He wanted to do some kind of food. So we went through all the things I knew how to do and we could put together  before Thursday morning.

He rejected Trader Joe's croissants (you get them in the freezer case, let them defrost and rise overnight and they're the closest I've found to fresh French croissants).

So we ended up with baguettes. Because I'm always about the baguettes.

We added a bit of sugar. Just a tablespoon-ish for the triple recipe (it was the last bit in the sugar bag, so I dumped the rest in). I've been avoiding adding sugar because authentic French bakers don't. But the bread ended up just a bit fluffier, so from now on I will.

We also brushed egg on the tops so they ended up browner and crunchier. Water in pans making it steamy and oven set at 450. 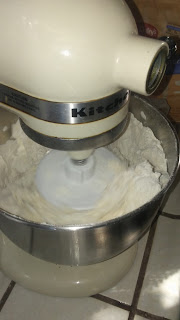 We made a triple recipe instead of a double one, so we'd have bread for supper. It didn't really fit in the mixer. 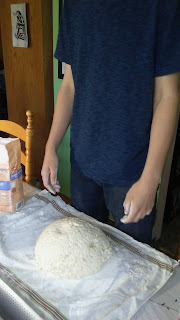 The blob after rising. It's a lot of dough. 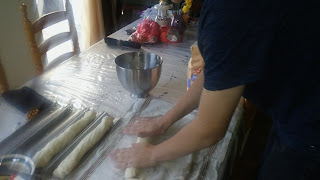 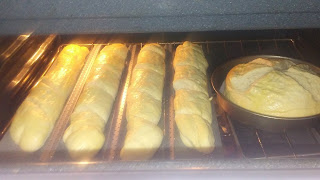 Baguettes for school and a round loaf for us. Tops slashed even too deeply. Note the shiny egg. I left the round one in longer, but it still wasn't all the way cooked in the middle, so next time I'll lower the oven temp a bit and let it cook another 10 to 15 minutes instead of just 5. 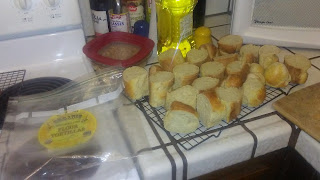 Post baking, he cut 3 of the loaves in servings so he could share with his class. He took the 4th loaf as the demonstration baguette. I told him that if they needed more servings, he could be authentically French and tear it apart with his hands. RAWR!

His dad told him he should have got up at 3 a.m. to be able to take the bread in fresh from the oven and be even more authentic.

And then he asked what was important to French culture about bread. Well, they want it to be good bread. They have it at every meal, no matter what else is on the table. It's.... just what they have. Every day. (OK, not so much anymore maybe, but it's really importantly traditional.)