A small selection of some of my fave books of 2016

I haven't been keeping up my Goodreads account this year, so it shows that I have ONLY read 97 books.

Mostly, I review books on there if I really liked them, though I also use it to take note of books I hope to read. Which means I don't have my DNF and C or lower books on there. It looks like I only read things that I give 4 or 5 stars to. I don't, though wouldn't life be grand if I could always pick up books I'm going to love? But it's a public forum and now I'm an author and not airing all my critiques. I did give a few 3 star reviews (which I don't consider that awful...at least not when I give them), but those are mostly of book group books.

ANYWAY,
I had only a couple re-reads in my 5 star list (but didn't go back and re-star all my favorite re-reads, so this is not an exhaustive list).

First, those authors I either don't know or only know slightly or online:

I'd like to say I'm completely objective, but seriously? If Amazon thinks reviewers are kinder when they get the book free and they delete reviews if they decide that the reviewer knows the author in person even if the only link is that you follow the author on Facebook... well, I'm just warning you.
So those who are in my RWA chapter, or, in the case of Shay, someone I've known since my little sister had her mom as a teacher in second grade and we were friends in high school:


I'll start with this second set:
Tina Gower is amazing and funny in her books and in person. The Outlier Prophecy series is a lot of fun. I think this first one is perma-free, so give it a try!

I've only read a few of Shay Savage's books and adored Win Some, Lose Some. The hero has Asperger's along with a bunch of other diagnoses. He's good and kind and sometimes he just can't cope.

Kristina Mathews writes sporty heroes. The More Than a Game series is about her first love: baseball. The Swift River books are about a whitewater rafting business. The second Swift River book *just* came out and I haven't read it yet.

And Lauren Stewart does angst and dark and very very sexy extremely well. I liked the first book in the Once and Forever series even better, but that was last year.

As for all the others:


Really, We Are the Ants is the most surprising of the list. We read it for one of my book groups and I laughed, I cried, I wondered if the author really meant that the kid was being abducted by aliens. It's YA with a gay teen protagonist who is being tested by aliens as to if he will press a button to prevent the world from ending.

Rose Lerner's Lively St. Lemeston series is amazing all around, with characters you don't often see in romance, especially Regency ones. Listen to the Moon is a marriage of convenience but between an unemployed valet and maid who marry so they can become the butler and housekeeper to the village vicar. It's very sexy and very open about the class distinctions of 19th century society, even among the household servants.

Signs of Attraction is Laura Brown's first published novel and has Deaf and Hard of Hearing main characters (and most of the supporting cast, too). It's an excellent romance and also educational about Deaf Culture.

Mary Balogh's A Matter of Class surprised me. It was a short novel and about a marriage of convenience between a disgraced daughter of aristocrats and the son of rich social climbers. And there's a twist to it. And it's awesome. I started out thinking I was settling into a typical Balogh (which I always like, but only about four stars worth of love because I'm strict) and it totally enchanted me.

Let's see: the Sonali Dev books are all good, if a bit melodramatic and, well, Bollywood-ish.

Georgette Heyer died when I was a kid, but her novels live on. Cotillion is probably my favorite of them, mostly because the hero is not her usual big, gorgeous, perfect man.

And this is my favorite Rainbow Rowell book. Romeo and Juliet meets eighties references.

Jessica Scott does amazing military romance, which she'd better do well, seeing as she's career US Army and knows these characters.

Nalini Singh's Psy-Changeling series is my go-to for re-reading and one of the few series I'll buy brand new in hardcover (with signature in this case, since I waited and bought it at the RWA conference).

So there I go. And I just noticed that my latest re-read of Lauren Willig's Mischief of the Mistletoe doesn't show. So there's another.

And, of course, my books. They're the best. 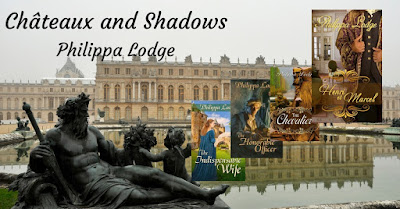 Posted by Philippa Lodge at 4:43 PM