It's been a crazy few days.

My husband had kidney stones at the end of December, then we had a month-long break of good health and tweaking eating habits. Then he had some more stones Sunday evening. Lots of pain for him and worry for me. Then MONDAY....He was passing another. Really nothing I can do to help except pat his head every now and then and try to get him to drink water and take an OTC pain pill. I went to pick up our daughter from school and about two minutes after I got home, the ambulance pulled up out front.

We spent the rest of the afternoon and evening in the hallway of the ER (There was a handwritten sign: "Hallway 18". Luckily it's a nice ER, but a room would have been nicer and everyone wouldn't have to walk past, ignoring us), him in severe pain for the first bit, then they finally gave him serious pain meds which slowly kicked in and the stone moved on. And we stayed there for another few hours....waiting for another blood test and the results and the prescriptions. And waiting. And waiting.

We're also on new insurance, but don't have our cards yet, so the billing is going to be a nightmare (We have a huge bill from the last trip to the walk-in ER, even with the old insurance). All that, and I went to fill his prescriptions yesterday and the major pain relief pills he was prescribed... we can't get because the hospital doctor did the prescription wrong and it's a controlled substance. That's the pain pills he will need if/when he has another stone. The pain pills that might keep him from calling the expensive ambulance again. And because it's a controlled substance, I just know that calling around, trying to get that fixed is going to make us look like addicts. We're not. I promise. I sometimes take ibuprofen for headaches and fevers. My husband doesn't even do that.

A fellow author, Vicki Batman, did me a solid on Monday and has my post up on her blog as part of her handbags and books feature. Do me (and her) a favor and stop by to comment!

Also do me a favor and buy Henri et Marcel! 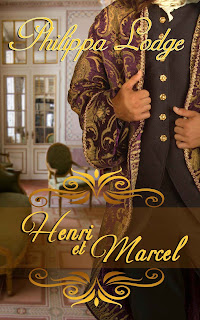